I love the mountains — so I decided to take a trip to the Altai. Winter posobirat information, talk to people, go there. A trip for a long time did not develop — there are everyday problems more than once cast doubt on the possibility to start a y th. But here, apparently in an office of heaven were given «good», it was a click, and then everything began to form itself. Companions on the trip was not, therefore, left alone with my «Africa.» 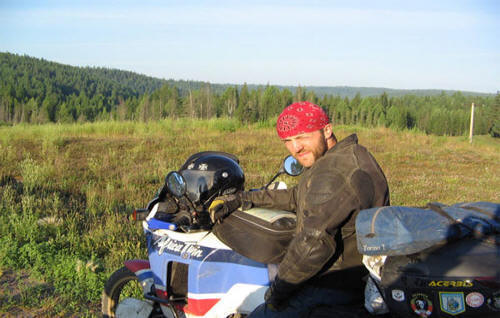 In the morning there was a strong fog, near Ryazan converted to rain. On the way, attracted the attention of shtraf- parking space at the post of GAI, jam-packed with sovkotsiklami, and a luxury car showroom on the edge of the shabby village. Before Syzran flew easily. The dam has decided not to go — all with one accord frightened gigantic traffic jams and a kind of «friendliness» gaytsy. On the ferry pleased neponyatki — last ferry left and sail there again — is unknown. Well — the dam because the dam. Contrary to expectation, everything went smoothly: the road is free, gaytsy — zero attention, a beautiful view of the Volga and Zhiguli Mountains! In Samara met Serge. The first question: «What's the plan,» I explained. «Tomorrow in Moscow leaves people too, on» Africa ", goes one-on-Baikal — you wait? «Even in the winter by browsing the map, wondering — not too far from the Altai and to Lake Baikal, may drop, and even when still so choose? I decided to wait. 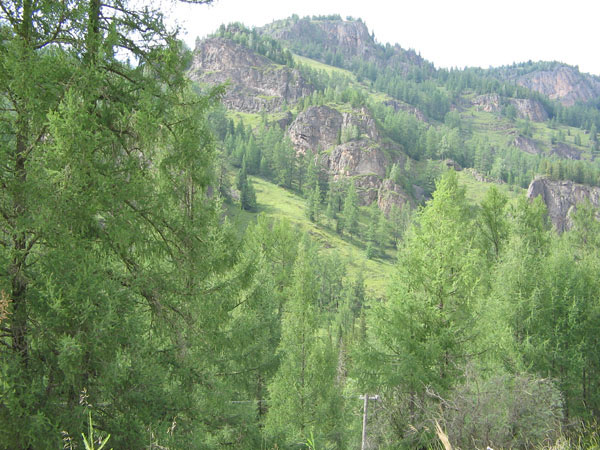 Ride around the city, we visited the local rock — club. By the evening of the next day I rolled Volodya, still caught up guys. Mentally communicated under the present „Zhiguli“ directly from the small factory. C morning left four of us — the guys went to Chelyabinsk at the wedding of a friend. Again, heavy fog, can not see anything going on the markup. Closer to Bashkortostan cleared up. Send hills flashed oil pumps. Several
Local gaytsy surprised question: „Do you really tasty vodka with them not you taking — my treat?“ Why translate delicious… At the cafe flies another „Africa“ ??- a couple from Kemerovo went to ride in Norway. Ural mountains were pleasantly surprised — the literature of the impression that there is very often the plants so career. And then all green, with clean, murmuring streams — the beauty! In Chelyabinsk I met Pancrate. Before we visited here skuteristy from Tver, on his way to Vladivostok to sinusitis. They have such a joke — torture yourself on the road a local beer. They say that after Chelyabinsk in the morning they were particularly bad. Then we went together. Went to Tyumen and Omsk vase life. 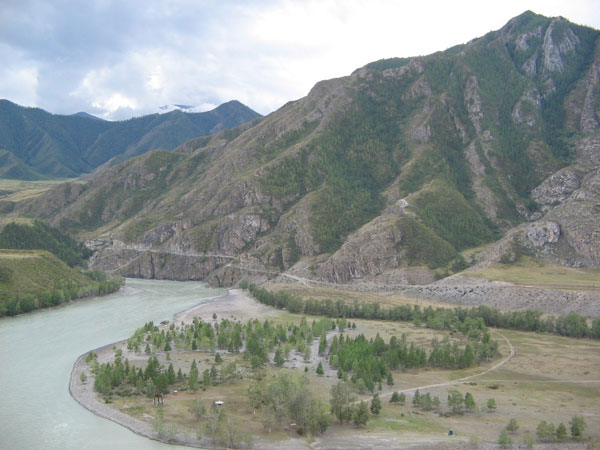 The road straight as an arrow on the sides of the field, birch from horizon to horizon and not a soul. The track is laid away from populated areas and gives the impression of complete solitude. Expanse of amazing. In Omsk, met the guys from the club «other men». Arranged on duty, sat. Pozdnenko stood, without sudden movements. To Novosibirsk of 660 — where no hurry. But not all so simple. Not having driven 100 km and catching a nail wheel. Perebortirovalis touches — crunching sounds. Sprinkle the wheel bearing. The result did not reach 200 kilometers, we moved out into the field, set up tents — here mosquitoes delighted. Fumitoks a tablet under the tongue — and sleep. 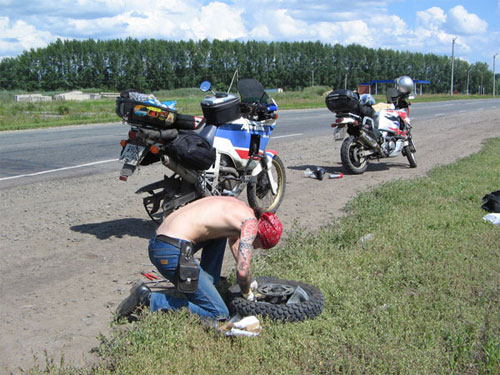 We got up early. Again dense fog. They emerged from it in Novosibirsk. No bypass — drove through the city. As if on cue the sun came out. All around clean, neatly. Again we went to the field. Volodya outraged — went to look at the Siberian taiga — seen enough of birch for a lifetime. In Kemerovo I had to wander — no signs — take the „language“. At last we went to the hill, the road zapetlyala became more fun. Stood at the entrance to Camp in Krasnoyarsk. And here is Steve and Laura. The guys from Australia, a year on the road. We traveled Chile, Peru, Mexico, the US and Canada. Now go from Vladivostok to Moscow. The day pass for 300 kilometers, knocking in the first house — they are taken at the post. At the same time, Laura went on a journey for the second day after the receipt of rights. The worst thing is the memory of the way — Mexican truckers. 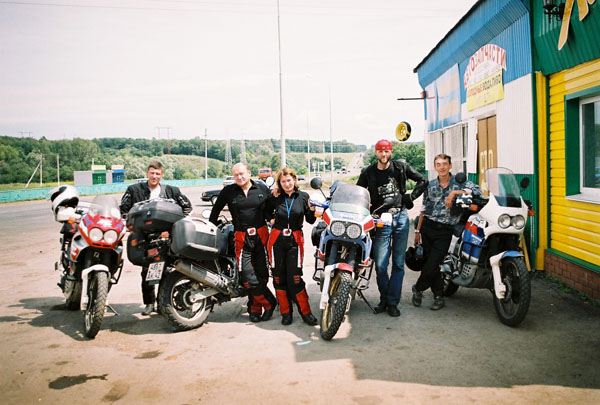 In the morning was a good rain — air freshened. During the Cannes road deteriorated — went well, and then the grader. Dug a trench across the road noticed too late, came at a high speed, could only think that tumble me now… „Africa“, to make the leap, against expectations of a fairly soft landing. Of losses — unbuttoned buckle on the bag. »Africa» — forever. 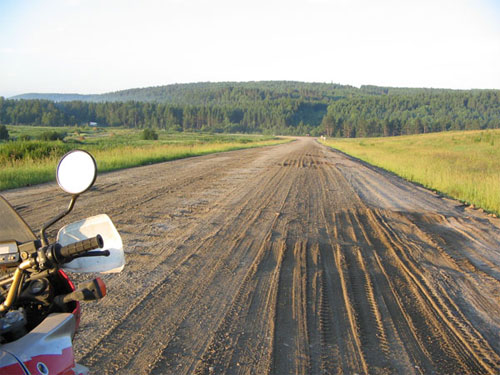 In a village with a completely broken road I came across a sign — «speed control system on the road barrier» That is what it is. Federal Highway is the concept of a kind — broken-grader, leaving gardens, and even with the sign «stop» — this is it. A four-lane highway — the local path from village to village. Towards caught Japanese brother «gazelle» fun we pofafakafshy, vezshy in the back of «Gold» and even some — the sport. Meet her motorcyclist told us that they were the guests of Ukraine, came to the fest «Baikal — the shaman», the taste of our
roads and not risked and continue to kill his technique. 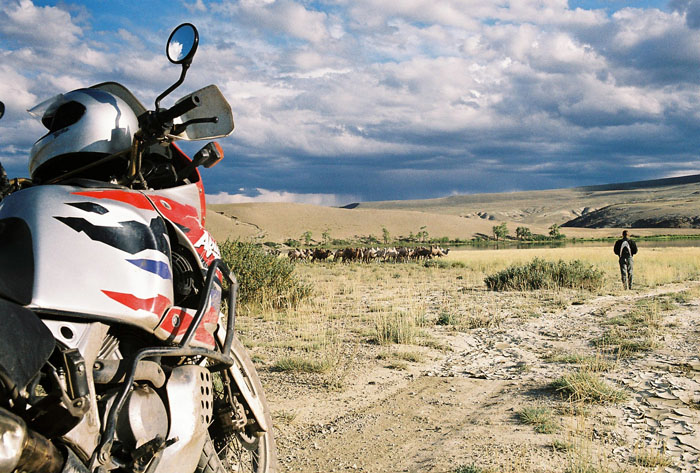 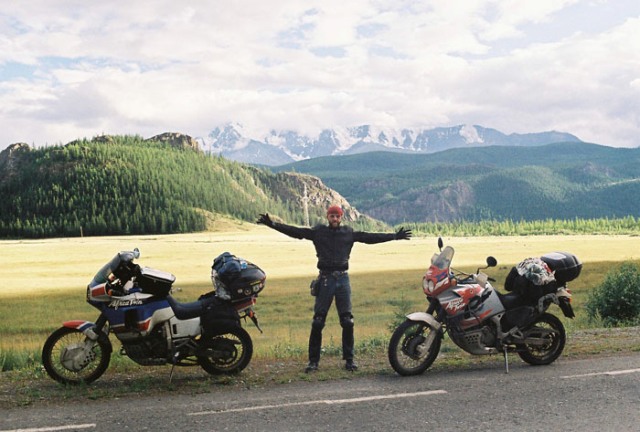 Stopped «Peter» in the dark arrived children from the Nizhny Novgorod club of «humpback» Cossacks returning home from Baikal. In rolled-grader, the road went more fun. We traveled Irkutsk. Way to keep Listvyanka. The road goes along the Angara, and that's for the next turn opens Baikal! Sparkling surface of living silver blue horizon becomes hot. And a sense of power and peace of mind at a time. Settled, but Vova nervous — it was too surroundings reminded him of the Pike perch. He pulled on Olkhon, and I stayed. Encouraged by the local «Zhiguli» on the Baikal water, even with omulkom! Four days passed quickly. Phoned, met at Irkutsk and again gone already familiar road. 50 kilometers to the camp again knocking wheel. Mosquitoes are pleased our stop — there are no words. There is still rain began to drizzle. Razvezlo ground, sailing times, gryazische darkens. It is us, not to relax. The motel took the last two places. The next day around rumbling thunderstorms, but the road is surprisingly kakim- passes them over the edge. Knocks on the fly kakuyu- something bad crow. From Kemerovo to leave the vase life Barnaul. Heat. The road is deserted, only occasionally catches a glimpse of the roadside concrete skeletons of giant buildings of the time scoop. 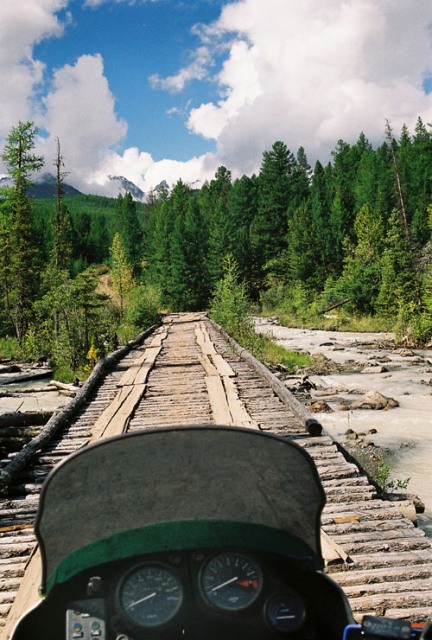 On the border with the Republic of Altai meet Michigan from Barnaul. I'm with him expensed Inet, but the meeting was not scheduled. Once again tells us much better to go, what to see. And it presents a detailed map — this can not be bought in Moscow. Photo Stella at the entrance, we stop at the Camp. Around dvizhuha mass tourists. Resort. C in the morning, slowly moving out, after a dip in the Katun. Send mountains — around every corner a new landscape, beautiful! We stop often admire, photograph as a keepsake. That Seminsky pass. On both sides of the taiga, cedar. Nakata thunderstorm. We managed to hide successfully tucked into the cafe. Lightning struck in the nearby mountains, and the duration of each was five seconds, the shower is repeatedly reflected on the rocks thunder — fascinating spectacle. 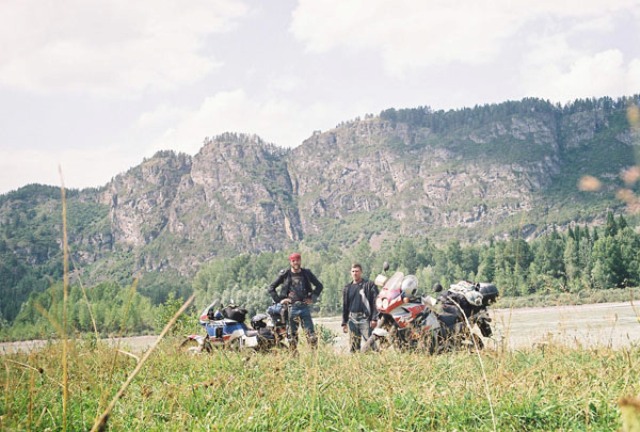 At night, we decided to tour- parking «Gold Coast». Immediately met with the Izhevsk and Barnaul rafters. Over the river road runs along the rock wall and moving cars at night, flashing lights create a fantastic spectacle. In the morning, children carried in the alloy down the road to the thresholds watched their passage. In the Altai is very fast change of natural zones — just went, and all around was the taiga, turned the rock — went to the steppe. Mountain bald, stunted vegetation. Road constantly run across marmots, hawks hovering in the air. And there is another resident of the road — a cow. A feeling that is smeared with honey for them — who is who sleeps on the machine — zero attention. In one place it was taken by surprise rushing head-on at full gallop herd of horses. On the right the river, left the rock on the oncoming car — what to do — is unclear. 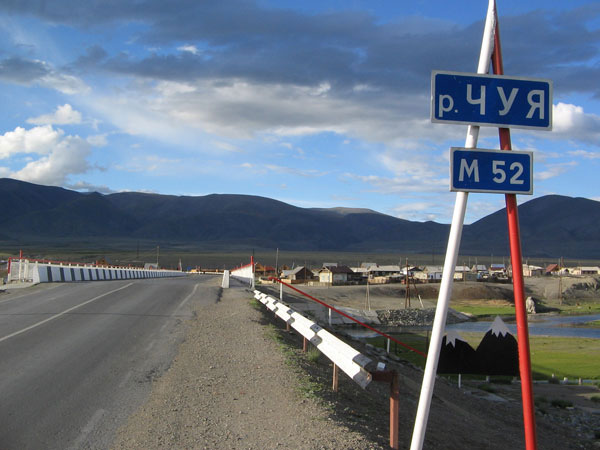 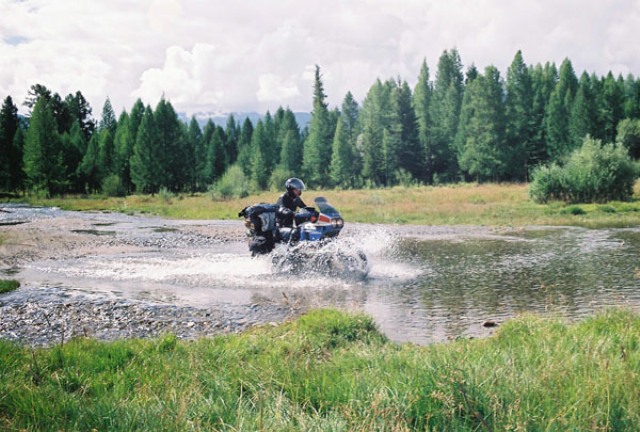 On the asphalt got without much pleasure. The next corner the landscape changed again — now on the desert. Bare mountains, sand, rare thickets of thorns and the public, how to order, for the roadside — a herd of camels. That Kosh — Agach — the final destination of our journey — on border zone. Linger were not running away from the rain, they rushed back. The next day, in order not to drive on the highway, in Tuekta turned into a loop to Yabogana and Cherga. Around taiga landscapes. Slowly it began to drizzle rain. Under the wheels — grader. It was hoped that at least the pass will be asphalted. Do not guess. Slowly sailing. It seems just about to run out onto the asphalt. New ambush — in the last kilometers of the road is being reconstructed. Dump trucks dumped rocks, smooth its wheels. Skaln?k mixed with clay, are any detours unthinkable… For all the dirty path climbed up to his ears. 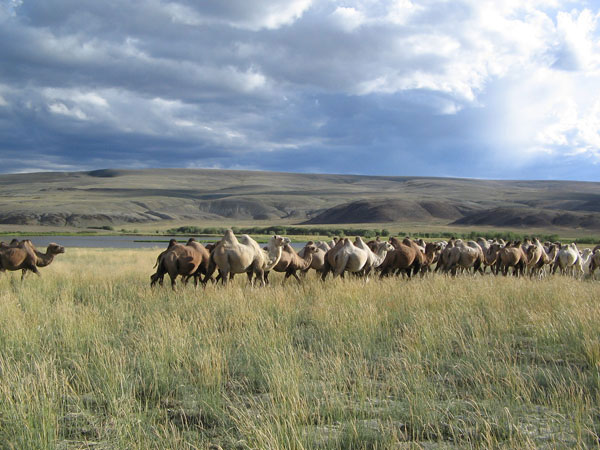 Local club — is a separate issue. Interior is very exotic, many original solutions — is immediately obvious — the people have invested soul. Take, for example, only one stool standing on two elegant female legs in shoes and stockings! We talked very emotionally. As a result, the next day a come only for dinner. Volodya has Rushed towards Omsk, there and met in the evening. Partner boasted that also knocked down a crow, but as they say «to spray». At the same piece of meat he plopped on the tidy, and another three days of moto wore something unpleasant. Omsk again so we just do not let go. C in the morning went on the wrong direction, and an hour later came up against the border with Kazakhstan. We do not need to. I had to make a detour, getting out on the track. Closer to Chelyabinsk pulled what that haze on the sides completely swamp the bare skeletons of trees. Gloomy landscape. From the bushes waved striped stick — probably wished bon voyage. The next day was a meeting with friends in Samara and Moscow and there, always come across as very cool. 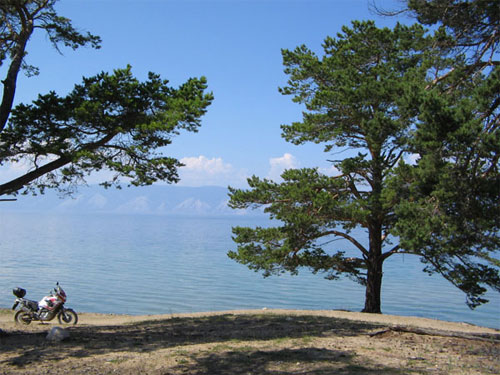 Left behind 14,500 kilometers and 23 days, the memories of which will now be a long time to haunt. 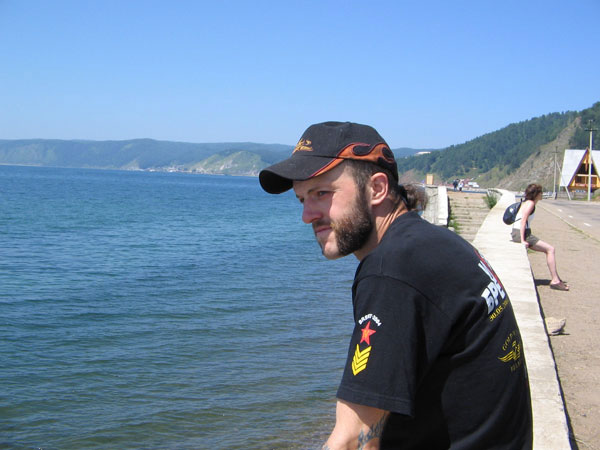