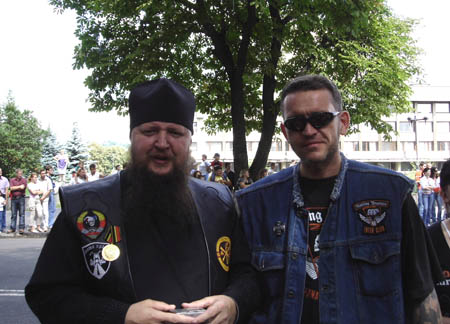 Micah RA MCC Moscow.
Thoughts on a trip to the Carpathians began to appear as early as mid-July, wanted to see how «Padonki lit in the Carpathians», although they are by themselves, regardless of the place, not weak spark. Plus the opportunity to see new places, especially to would not go, in general, the decision was made. Closer to the date of departure formed a group to visit the historic homeland of Count Dracula, as follows: Max «Luber» Pasha «Angel» with his wife Inna, Lech and his wife Olga, Xenia and myself.
Due to the disposal of the following techniques: BMW R1100GS, BMW R1200CL, Honda ST1100, Honda F6C and Mitsubishi Pajero, the morning of August 22, we left the capital, and different groups came to the fore in the direction of Brest, where it safely in the evening, where he spent the night in the hope of following day to get to Uzhgorod. In the morning, and then the entire trip, everything went according to the usual scenario: the border, the rain, the road is bad, good road, overtaking on the counter, waiting for the laggards, refueling, again rain, the meeting, the booze, the same person, with the past «Brest -2006 »," Goblin-show "," Anarchy 2006 ", again booze to memory loss, road, rain (Jam specifically), 4000 km. in a raincoat and I'm home. That's actually the whole trip! 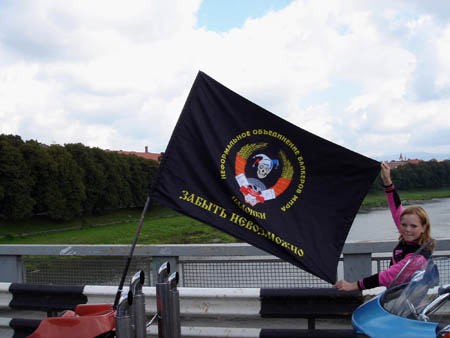 And why write something? In the Carpathians, beautiful, «Padonki» Well done, all great, special thanks «Shona» for the meeting! Nothing to write something in the mind of the memories one rain all the way! However, because any journey always come back with some new experiences and ideas, in this case my impressions rather are political and interethnic issues. I must admit that the only «but» 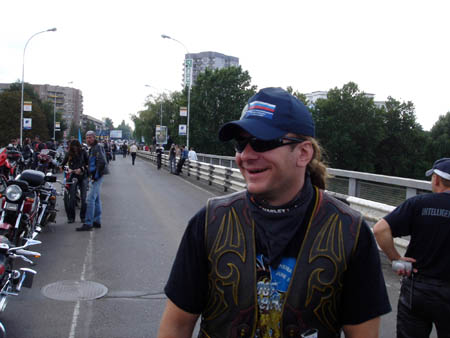 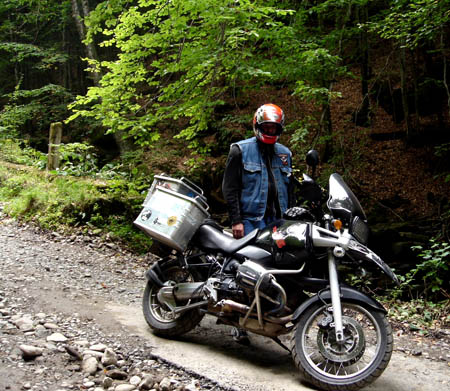 Xenia.
In August 2006, quite by accident, I found myself for the first time on the bike show! It is of paramount event for those who understand at least something on the go! And even more so on the moto! No! Of course I saw the bikers before, but did not have the pleasure to communicate with them personally. The ride with the bikers — it's something !!!
Path lay in numerous cities, towns and other populated 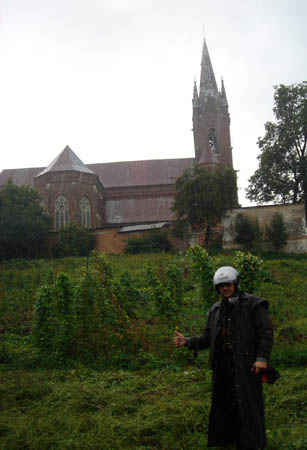 points of our vast country and abroad. We rode in a jeep, closing our column consisting of four supermototsiklov, which controls at least superskie bikers. 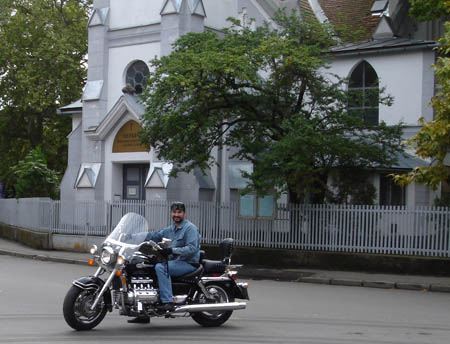 During the day among the Fur, at night in the pitch dark we made our way to our goal — Uzhhorod. Hooray! Here we are! Housed in a wonderful hotel «Europe», a cultural rest. The next day an organized convoy drove through the city. It is something! Houses, streets, weather, people — a miracle! Children and adults welcomed us, and we signaled them back. The hum of the sirens, the roar of engines — the emotions over the edge! They stopped in the square, and the performance began. Stuntmen on motorcycles «subscribed pretzel.» In the evening it took place for the sake of what, in fact all gathered. Old friends happily greeted each other and make new friends. It affects the scale of the event. A huge number of people from different cities come together, overcome huge distances and numerous difficulties.
Before leaving the city looked and visited Uzhgorod castle-fortress (X-XVIv.v.) And Cathedral (1646g).
A mountain !!! Have you seen those mountains !!! So ride and see !!! Carpathians!!! Air, mountain rivers and streams, the sun, blackberry !!!
On the way back we stopped for the night in Lviv and Kiev. A stunningly beautiful city. Striking architecture! Really liked Belarus. Nature, people !!! Truly Belaya Rus!
Memorable for me was the trip to Motyka. The speed of the wind, a change of scenery !!! This is dope! Bikers cool guys! Diverse and interesting! With a sense of mutual support, without which the road does not. They feel safe! They are cool!!!

Max «Luber»
For me the discovery was how much the motorcycle fraternity in Ukraine. Even in the small towns of western Ukraine, Moscow mototuristy found support and assistance from local motorcycle clubs. Biker spirit in the territory of the former Soviet Union has no boundaries and national color! In Lviv, Lutsk, Uzhgorod to communicate with us on the Russian mentality — Slavic, girls — good… The soul rejoices! 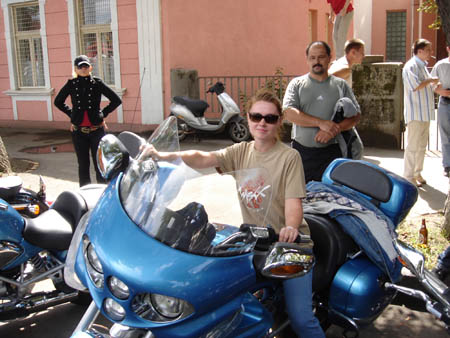 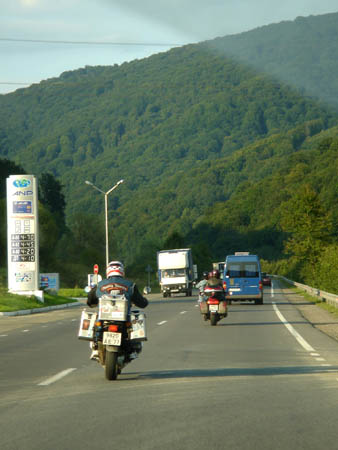 Pasha «Angel» Ina «Red»
Carpathians from the first time we were not allowed… At 90m kilometers from Moscow, our trusty steed zakapriznichal, and we had to return to the «Bike Land» But the burning desire and tempting unfamiliar route, overcame all the whims of our horse and we once again rushed to the open spaces. «Mink», as always, pleased with its quality, purity and freedom of flight.
But we had to cross the Belarusian-Ukrainian border, as a way to «over.» By the way, the border post near Kovel, friendly and not bad. We made our way through the village and provincial town, and why it is said that only in India cows go where they want. Geese, chickens, children… all that rich Ukraine, met us on the road. Weather conditions, we are not spoiled, yet the end of the summer. On the road to Uzhgorod, we toured the city of Lviv, the heart of the western Ukraine. With every ten kilometers, it was hoped that the roads end, technology moaning endless number of pits and tracks like, the whole body was tense. According to rumors over Lviv it had to be a way, and we hope, in anticipation of getting rid of excessive vibration, the route continued.
We began to meet motorcyclists, and the more we met them, the closer we thought the end of the route. But, frankly, we were disappointed and wonder of Lviv, Ukrainians launched a major overhaul of the road, and we saw a complete mess for an indefinite number of kilometers round trip. It creates chaos. People showed their manners in relation to each other, not giving a loud swearing obscenities. Someone who might have tried to get through the corn fields. It was like the next stage in a computer game, you want to go. And finally, we have felt the asphalt 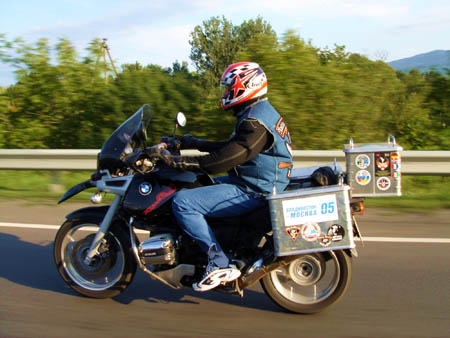 Shaking stopped, and in front of us opened the first silhouettes of the mountains. We waited for a streamer. Night was falling. To say that the mountains are beautiful, do not say any of that. Huge, densely covered with green giant, surrounded us and change their appearance, after each long serpentine turn. Elite, many of them hidden air mist, and below you can watch the «birth of the cloud.» Somewhere below, at the foot of the mountains, one can see a few of the village, and the incident rays, making their way through clouds, light small cabin, making them fantastic if painted. A slightly elongated haystacks resemble chocolate truffles. The ride along the serpentine, in the Carpathian Mountains, it is a pleasure. Quality road surface good motorway and alluring smooth turns, pleasure and joy, in a head climbs a familiar tune. Incredible feeling when you can afford the speed and turns,