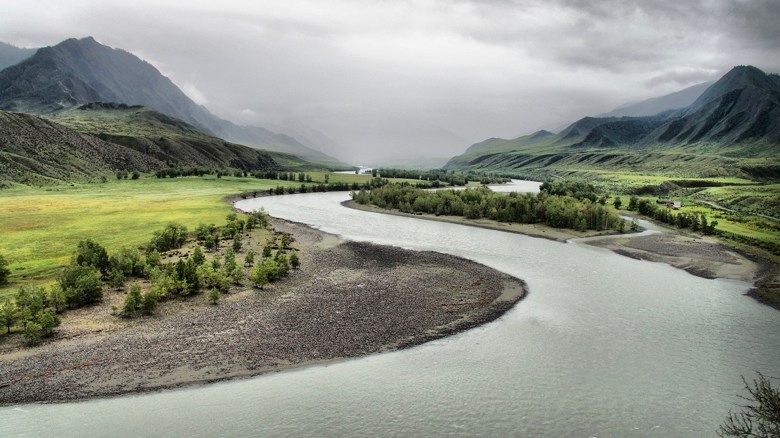 A somersault over the head… now would be crouched — to press down their long legs, they still, I hope, be useful. I roll. In the pose of a kolobok tumbling like with an accelerating acceleration… So it will not work — you need to slow down. I throw my arms and legs and with a light yuz in the pose of a spider-man fixate on the slope. I raise my head — on the path lies my motto, next to his Xre is Oleg Okshka Maximov and smiles. Well, then I did not mean it badly, if necessary, they'll take it to the circus. The slope is sloping and not at all dangerous, and then about 15 meters I rushed to the stop. On the previous passed section of the options, of course, there were no — a path to the palm and at the slightest error to fly two hundred meters down, to the seething Katun. But we are experienced rascals — we relax only in the light places and only characteristic snacks on the sidus give out raging sometimes in the soul of passion. 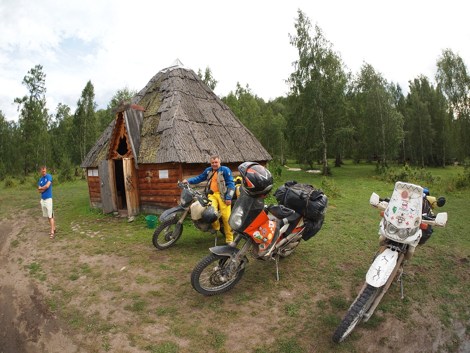 The Tungur-Ina trail, also known as the Katun Trail, has been considered a classic of Russian tourism for many years. Cut off for tens of kilometers in the rock above the seething Katun, the trail was used in the Soviet times as a crawl track from Mongolia. The length of the Tungur-Ina trail is 60 km, of which it is considered impassable for cars ~ 20 kilometers. By car, a detour is more than 400 km. In some places there are still preserved fortified cliffs and rails laid out from the stones. If you want and skill, along the path you can ride a motorbike, the road is qualified by a mototourist federation as a route of 5 c.s.
After the second world war, the captured Germans, under the direction of an unfortunate engineer, felled in a 30-60 degree slope, the so-called «digging road» at an altitude of about 300 meters above the river level to connect the Chuysk tract and the Ust-Koksinsky district by road. However, the state commission decided to shoot the engineer who supervised the construction, since the «digging road» even immediately after construction was too extreme for the traffic of cars.

Since then, 60 years have passed. The chopped shelves over the rolling rapids of the Katun fell in some places, and the «digging road» crumbled so that it was now only suitable for horses. But nevertheless, it is popular with pedestrians and tourists. First passed on motorcycles in 1967. A few years ago Novosibirsk's crazy jeeps literally carried their boxes along this route. Now everyone is racking their brains — how did they do it? At present, without luggage on the 250th, it rides regularly… During the wheelchair around Mongolia and Altai in August of this year, our team joined the legend, though on 650 and with a full tourist calculation. 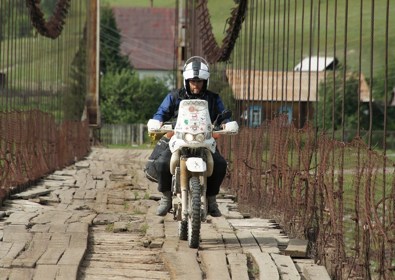 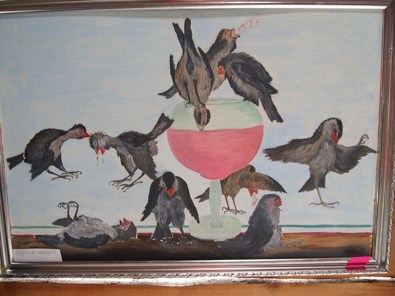 Conquer the legendary path we began with a hearty breakfast in a thematic cafe made from measles, which was built in Tungur on the opposite shore of the village. Of course, for this I had to ride twice on a wobbling suspension car bridge, which is a local attraction. 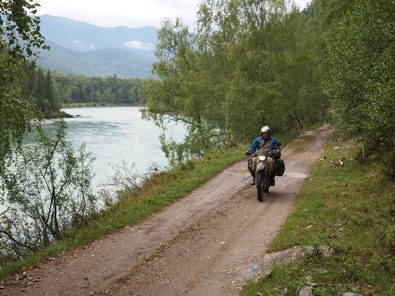 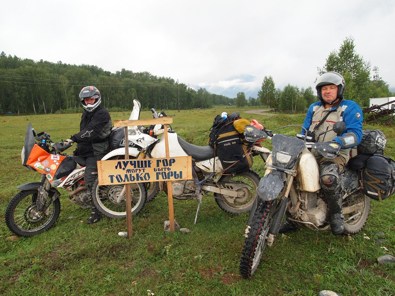 The first on the trail prudently allowed the most technically perfect member of our team — Mikha Pate on a smart KTM with a trendy nafigator, which was even a track of the upcoming road, although by common sense there is no place to wander there. Flickered a small forest, an open beach with tourists and tents, and here it is — the first ford! They took heroic poses (they are looking at us!) And this small stream in general swung. 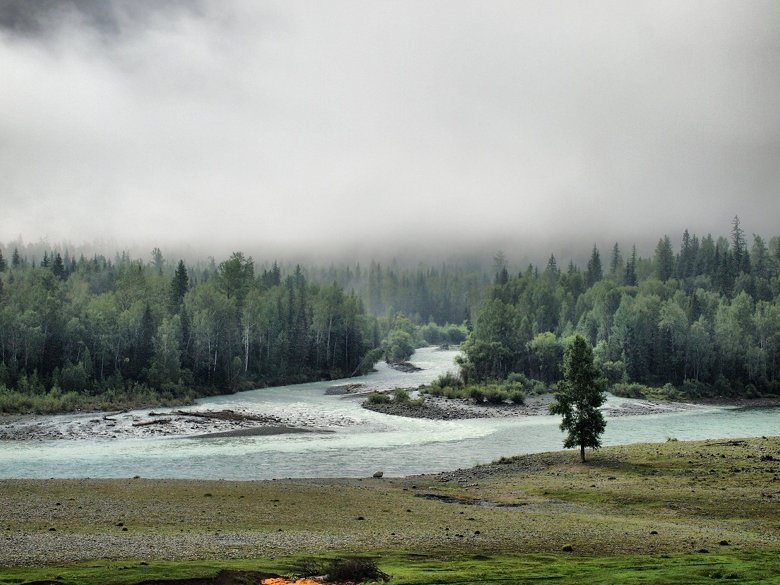 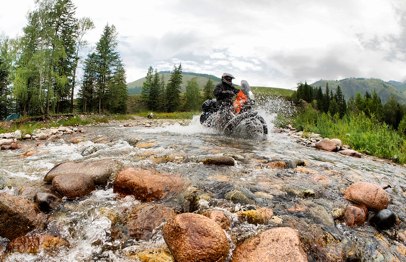 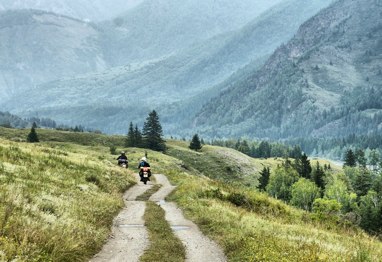 And then she started! «Roadway» quickly narrowed to the width of the palm and was pushed across the slope. We go on tiptoe — under the right foot there is nothing, only somewhere far below the river rustles. Sneaking, teeth clenched, looking like a terminator — every millimeter of the path is calculated. Here the leg was pushed against a stone that was unnoticeable in the grass — the muscles instantly extinguished the impulse received in the direction of the cliff, then the wave of adrenaline was already covering… Sometimes we stop giving rest to the strained muscles and at the same time turn our heads studying the neighborhood. 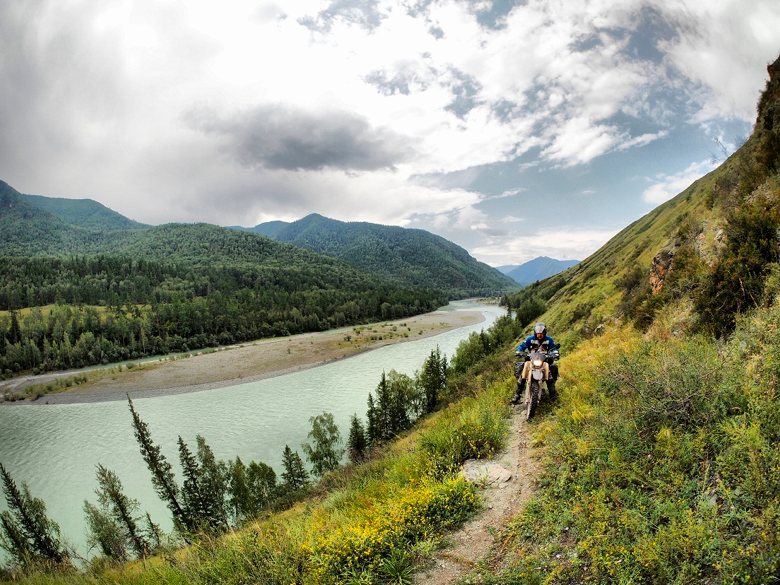 From the ragged tufts of fog the sun periodically peers out, and from behind the hill a grumbling growl of thunder is heard. We overcome a small rise and bury ourselves in a normal track, which, as it turned out, went parallel just above the slope. Scratching the turnips in bewilderment, we decide that this is probably the way for «devchenok», well, we are real extremals and therefore we choose not the most simple options… At the same time, Oleg and I somehow do not look at Mikha kindly… Next forest. Through a hefty fallen pine mote had to be dragged on his hands. The rest of the windlass manages to go round. In places, the young shoots close over the path and through it you have to break through. At the same time, invigorating streams of water are falling on us … 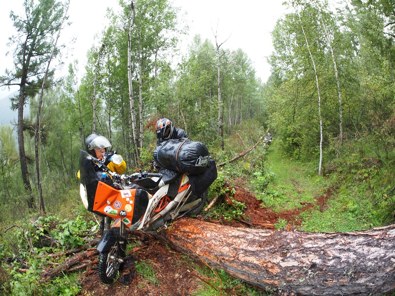 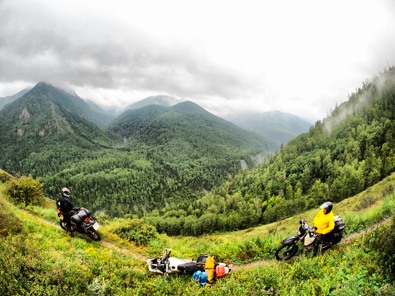 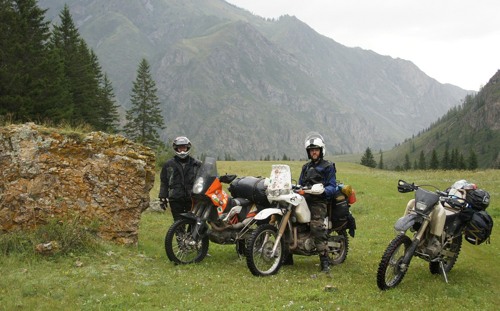 We met pedestrian tourists, chatted for life. Another creek with large stones at the bottom and a steep exit made everyone lie down. But together we won it. I took a breath, I went on. We skipped a small pass of Kaznaht. The ups and downs, the path seemed to be wider and the smoke from the fire could be seen… Is it really the most difficult thing behind? Of course not… Smoke was a low cloud, the forest parted and spit us out into a clearing with picturesquely scattered Kamenyuki. Further the path clung to the river and went along the shelves cut in the rock.And here is a cult place with the legendary inscription «Mototourism is the best rest». 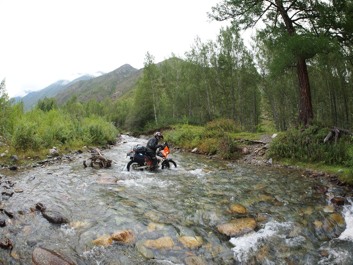 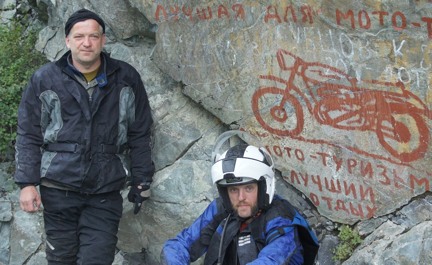 While went glazeli-photographed krugnul not weak rain. We huddled under a negative rock slope and probably watched the humming of clouds and streams of rain for an hour. It was then useful zanykannyh on the pockets and pretty rumpled marching life of chocolate.

Slowly we grew older and we went on. Here's the bridge built by the jeepers on the site of the failure. 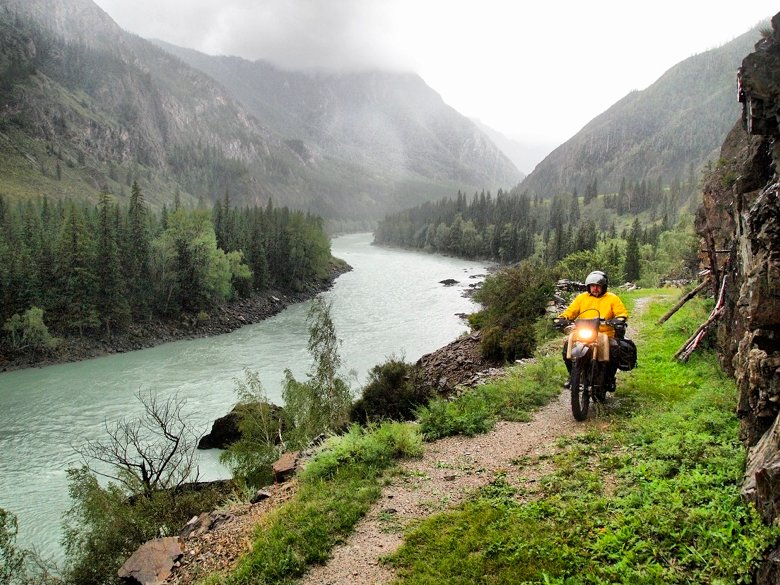 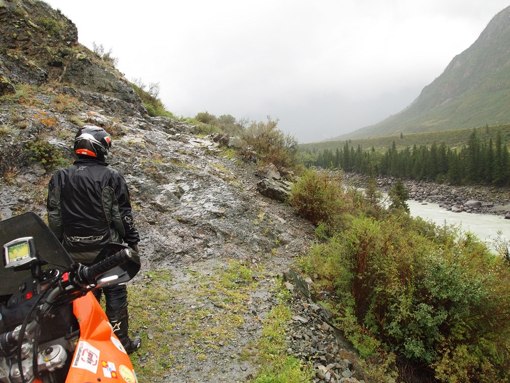 A little farther, we are resting on the rock blocking the path. They were like, they were studying the possible trajectory of motion. In all it turns out that it is necessary to jump from this acceleration to this wet Kamenyuk on which there are a couple of notches that can serve as stairs. At the very top it is desirable to put the front wheel in the existing slot and at the same time hope that the insuring friends in case of excess will have time to catch you, because otherwise Katun, after a short flight, will happily take you into his dull embrace.
One… two… three — first went. Miha masterfully fixed at a given point — then we picked him up, sent him along the necessary trajectory. The second one went. I came out somehow not very well — I remember just lying on my side, though in the opposite direction from the river. They picked up, pushed, and gripped with clutch — the second passed… Olezhka on his 250-ke flew a draft. Again they took a breath and rushed on ... 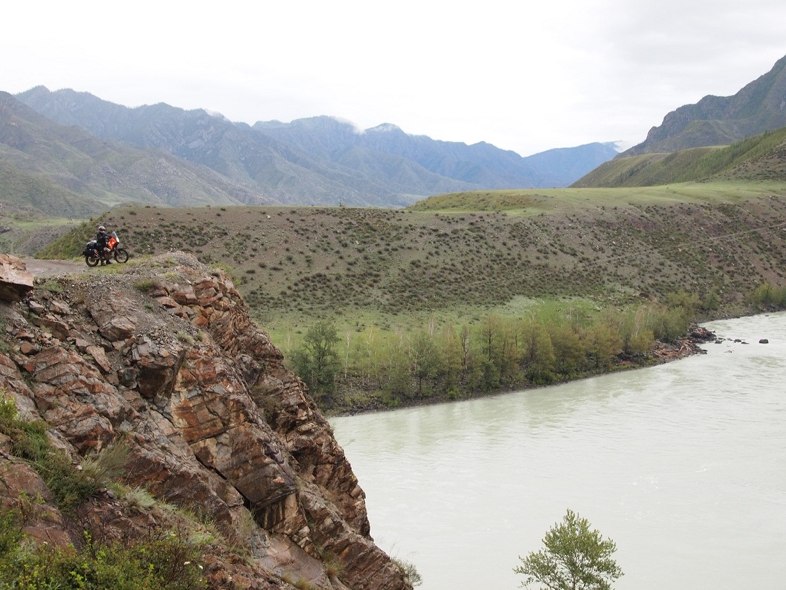 In general, on this rock the extreme was over, the trail became a full track and under the drizzling rain brought us to the village of Inegen, on the streets of which in the puddles small flocks were floundering. Oleg in his affection uncovered his camera, but the native, with respectfully carried a little aside the big ruzhzho, took these actions at his own expense and began to make inarticulate sounds with a clearly negative color. I had to assure that his person does not interest us at all. Well and further fields, the scattered track, again begun rain. We met another couple of wet cyclists. They offered to take them in tow and instantly domchat to habitation, but the guys courageously refused. At some point, a ghost of the «black endurist» appeared through the veil of rain, but on closer examination it turned out to be wrapped up in a cloak of the OZK Altaic in ancient Izhak… Again we went rocky clamps. In good weather, you can come here from any road on any transport, make thematic photographs and then tell your grandchildren with a clear conscience that you were on this trail. Well, we jumped the suspension bridge and, wet and frozen, arrived in the village of Inya, where we were waiting for a heated bathhouse and earned combat 100 grams…

Taken from the site: